Covid-19 hits in spring 2020 and of course all the students and professors had to deal with the mass confusion and quickly shift to an online educational model. After Friday’s announcement from President Mearns stating all classes will be virtual until the end of Spring semester, the first-year professors met through the weekend to discuss the logistics of the situation and how we would proceed.

We then held a meeting with first-year students to discuss the situation at hand and what the opportunities might be for all of us as we had to pivot and improvise a new educational design model online.  It was quite an inspirational moment for me, for many of us, I think. Any fears I might have had or still had were now turning to curiosity and excitement to see what we could do, what we could accomplish,during this adversity. How we could improvise, adapt, and overcome once the initial shock was over? Improvisation and the ability to be fluid in mind, body, and work I thought would be key.

I was teaching CAP 102 and my teaching partner Natalie Yates in Landscape Architecture was teaching CAP 162. Natalie’s ability to roll and transition through to the online shift was just incredible. She and I immediately went into hyperdrive communication mode as we talked several hours each day on how to fuse together, adjust, adapt, and improvise what remaining work we had for our section.  It was through those discussions in the transition days that the idea to create a series of “hybrid collage drawings” hit me.  As an “experimental way to communicate the ideas, textures, patterns, colors, and concepts” of the students’ current project.  Natalie and I bounced a few ideas off each other, and then we synched it up with her CAP 161 drawing unit requirements and my CAP 102 studio requirements.  And thus “The Quarantine Collage” hybrid drawing unit for our section was born.

This is the initial way we presented everything online via Zoom to the students.
Using your previously drafted aggregate axonometric from Drawing Typologies Part 1, create a collage drawing with 4 things from your life at the moment – newspaper, food wrapper, soda can, etc. Use this new drawing to test the idea of a hybrid drawing, to test colors, and test text as texture. Try out new methods of partial development and create two small tests to discuss and then a final on 16×16. This will be used to discuss how you might move forward with the rest of the drawings for your studio project.

The Quarantine Collage Test
I normally do small experimental tests for projects I create for the first time so I can be prepared for possible things to encounter within the flow of the project  during studio time. Without a test to learn from, the project coupled with now being at home might really confuse the freshman students. I quickly conducted three to four small 1-hour tests which then lead directly to my first collage – “Binary Cluster”. 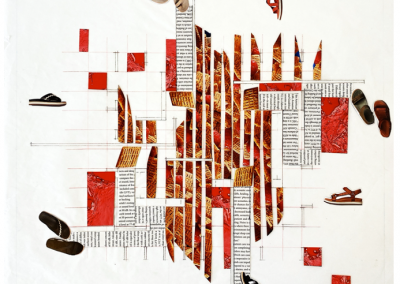 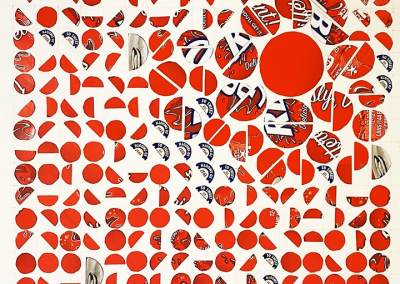 For Binary Cluster, I chose to go with a small outdoor garden space for contemplation. I then followed all the parameters we had given to the students (above). Conceptually, I was using the following words…asymmetry, flow, openness, modulation, extension, movement, cluster, strip, blend, bleed, and omni-directional to push against as I created metaphorical equivalents in water features, points, lines, planes, ramps, structure, pathways, and aggregate textures. Plus of course, an indication of the human via REI and Merrick shoes and sandals.

This collage happened several months after the initial project tests and Binary Cluster. Interested in some new possibilities from the first round of tests I gathered up my materials and decided to create my own form of Surrealist Drawing Game for a new variant of the Quarantine Collage project.

For Supernova Dissonance I was interested in the use/creation of repetition, rhythms, and counter-rhythms through the formal use of the word “pattern”.  I created a series of numerical rules which directly lead to formal design moves within the work.  I wanted to explore a singular pattern and what its possibilities might be as I applied different scales, breaks, cuts, rotations, and compositional variants to it.  Additionally, I was interested in how a circle might be as small as pin-dot or as large as a sacred space like a mosque, for example.  After a few quick tests I felt I had learned enough to proceed forward with the full work.  I purposefully was looking for a bit of looseness in the hand-cutting of each circular form as a counter balance to what we normally think of as circular precision and perfection.  There were also overtones of Japanese ideas of design, something I have become more and more interested in over the past 20 years via my travels in Japan.

How a designs overall complexity has evolved out of a relatively simple form and series of numerical rules still fascinates me. The work then evolved and de-evolved into a series of compositional moves based of my game rules (utilizing dice.)

Japan being known as “The Land of The Rising Sun” eventually lead to the title of Supernova Dissonance.  The Work is 18 x 18 Mixed Media but primarily cardboard boxes from Big Red soda boxes and took roughly 8 hours to create.

Student Quarantine Collages
Here are some of the collages from the students. 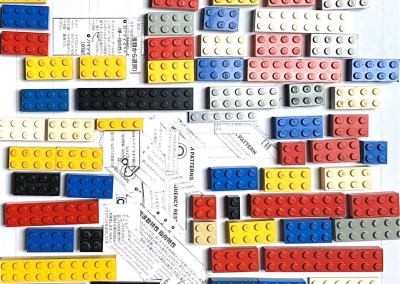 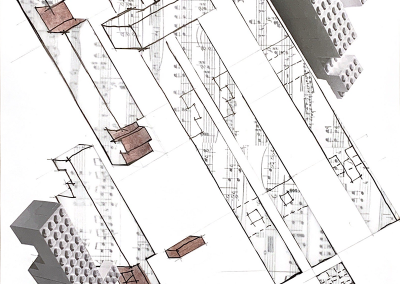 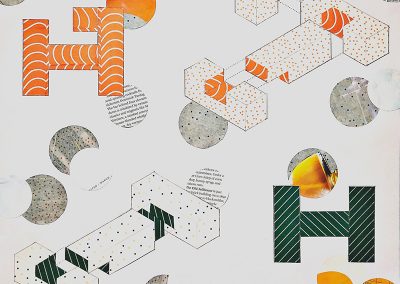 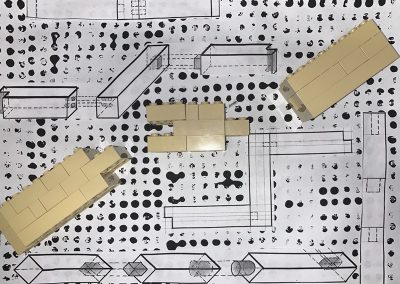