Making a Way Out of No Way

Ricardo Ayala was born in a women’s shelter in Phoenix, a region known by locals as the “Valley of the Sun.”  He was born to a single mother who had recently migrated from Mexico to escape from a physically and emotionally abusive relationship and to seek better opportunities for herself and her children.

Even though the overall poverty rate in the Valley of the Sun has declined in recent years, it remains slightly higher than the national average. Opulence is abundant throughout the valley; however, areas with concentrations of extreme poverty remain present. A significant percentage of red and brown citizens, and to a greater degree, undocumented individuals, reside in deplorable conditions where social and environmental injustices are commonplace. The area is littered with scraps of metal, abandoned appliances and tires that provide habitat for scorpions, rattlesnakes, and other deadly venomous creatures.

As a young boy, Ricardo recalled throwing rocks at objects and collecting live scorpions and placing them in jars. As he ran and played with the neighborhood children, often barefoot, in the hot desert sand, Ricardo was unaware of the dangers or of the gravity of his circumstances with his mother’s endeavors to find food through local agencies and transition from the women’s shelter to subsidized (Section 8) housing. He witnessed inebriated men in the community and became acutely aware that the vast majority had been confronted with seemingly insurmountable societal barriers. They had given-up on being able to provide for their families and surrendered to the use of mind-altering substances to pacify the pain of hopelessness.

Ricardo began to understand at a very young age, that “not much was expected of me, or the people around me,” with respect to seeking education, pursuing the so-called American Dream, and making positive contributions to society. He witnessed people around him joining gangs and engage in criminal activity to provide momentary access to the opulence that surrounded their community. A child should not be burdened with the understanding that these societal patterns are systemic and intergenerational in nature.

Ultimately, Ricardo Ayala’s family was encouraged to relocate to Indiana and move in with his mother’s sister and her family in the Greenwood area. The small two-bedroom apartment housed his aunt, her husband, and their three children along with Ricardo’s family of five. Ten people in all lived in the small apartment.

Ricardo enrolled as a fifth grader in the Greenwood Community School Corporation at Northeast Elementary School. While at school, Ricardo began to experience and enjoy art in class. Words of encouragement from his teacher, Mrs. Browning, provided the support that he needed to begin his path toward architecture and design. Ricardo’s confidence was enhanced when he was encouraged by his teacher to enter a local Christmas card design competition sponsored by the City of Greenwood. Not only did Ricardo agree to enter the competition; he won, and was honored by the Mayor of Greenwood, Charles Henderson, and featured in The Daily Journal newspaper. 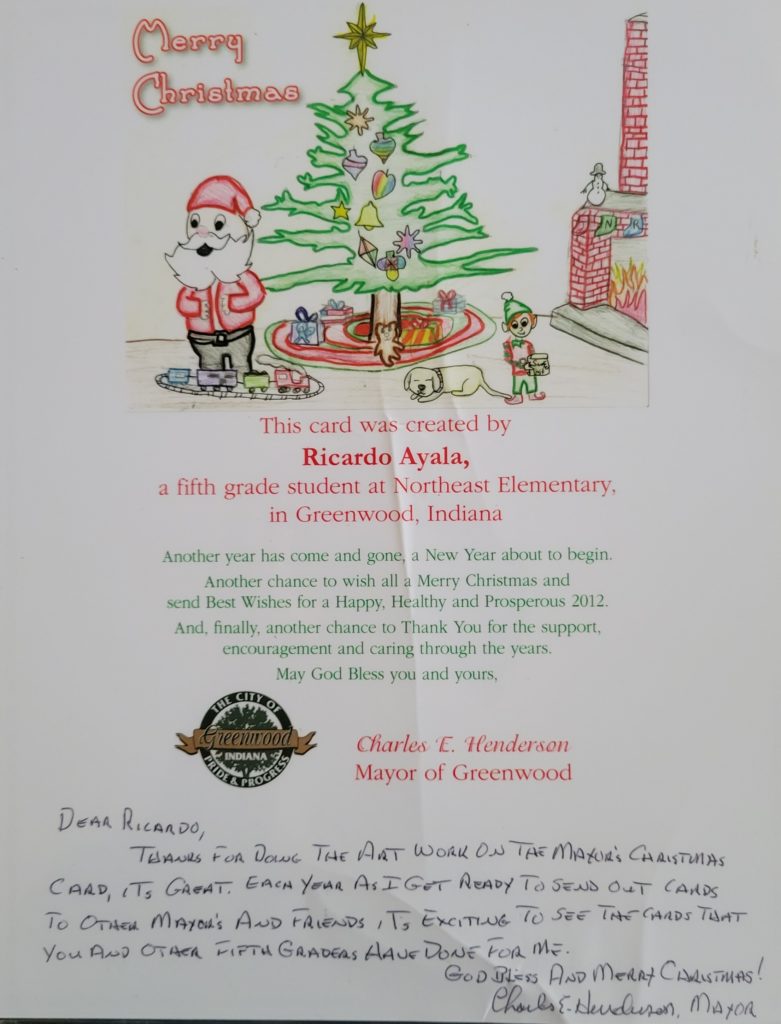 Winning the contest served as a major motivator and confidence builder for Ricardo, but he still faced various forms of discrimination that challenged his determination and resolve. He encountered discrimination by individuals because of racism, implicit bias, and ignorance on a regular basis. For example, even though he was enrolled in Honors English courses, and English being his first language, an administrator insisted that he be placed in English as second language courses simply based on his physical appearance and name. This insistence had the potential to undermine Ricardo’s college preparatory track with respect to the availability of other college preparatory courses.

Another example of bias Ricardo experienced was during a health crisis where he was rushed to a nearby hospital and informed by hospital staff that there were no medical professionals available to assist him since no one spoke Spanish. In this case, implicit bias placed his life in jeopardy.

As a high school student working at Menards in Greenwood, Ricardo often overheard customers make racist statements about people of color. Such experiences can be demoralizing and inherently encroach on one’s self concept; however, in the case of Ricardo, the negative experiences only made him stronger, more determined, and more focused.

The challenges that Ricardo Ayala has faced throughout his life have been the primary force behind his success in school, work, and in his personal life. This, combined with talent and work ethic compels him to excel in profound ways in the architecture department at Ball State. Ricardo has been recognized for first place in the 2021 Indiana Hardwood Lumbermen’s Association Annual Student Design Competition for 2nd-year architecture students and in 2022 received first place in the MKM Steel Competition for 3rd-year architecture students. He was also awarded The Kevin Theobald Memorial Scholarship as an architecture student who has demonstrated a drive for excellence and a commitment to their field of study. Ricardo is currently residing in Chicago as part of an internship with Chicago Mobile Makers under the leadership of CAP graduate Maya Bird Murphy, ‘14. Ricardo Ayala is making a way out of no way, and he is just beginning. Watch out!

Phoenix continues to be one of the fastest growing and sprawling megaregions in the United States. Today, the city population of Phoenix proper exceeds 1.6 million*, recently surpassing Philadelphia to become the fifth largest city in the nation. As of 2020, the metropolitan population of the (Phoenix-Mesa-Chandler Metro Area) is 4,845,832* which essentially constitutes Maricopa County and covers just under ten thousand square miles (comparably, this is nearly a third of the entire land mass of the State of Indiana).